Bipin Majevadia, our VP of Sales for EMEA here at Guestlogix, has been a regular on the tradeshow route for 2017. He kicked the year off at FTE Dublin, attended Aviation Festival in London,  made the long trip across the pond to reveal the new Guestlogix platform at APEX Expo in California, joined the team in Barcelona for World Passenger Symposium last month, and finally, just last week he wrapped up our event season with a solo trip to Aviation Festival MENASA.

In addition to his experience at these events, Bipin has been an incredible asset to newer members of the Guestlogix team with his extensive industry knowledge. With four Guestlogix years under his belt, he helps to bridge the gap for current and potential customers between where the product was, to where it is now. Long story short? He knows what he's talking about, so we thought it was time he joined the author list on the Guestlogix Blog!

"My trip to the Middle East started with visits to our customers in Abu Dhabi and Sharjah followed by 2 days at the Aviation Festival MENASA. The event was well attended and I was really impressed by the number of senior level representatives from the region’s airlines and airports. 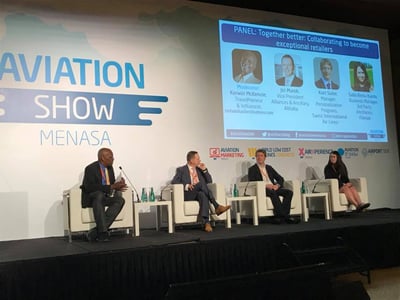 The day one keynotes were delivered by various airline executives including:

A panel of CEO`s continued the talk surrounding the future of low cost travel. It was interesting to hear from Con Korfiatis of flyadeal and Rohit Ramachandran of Jazeera Airways about the digital marketing success they had seen. A number of presenters including Khaled Absi Halabi from Facebook talked about the youth demographic as the fastest growing segment in the region, some 60% of the population is under 25, making it one of the most youthful regions in the world.

For me, the presentations and roundtable discussions on `Discovering the rise of the omnichannel traveller ‘and `The emergence of the silent travelling millennial` were very interesting and gave further proof that the Guestlogix strategy and roadmap is the perfect fit for airlines today and for the future.

Tata Communications covered how the industry needs to manage the shift to a hyper connected digital economy and shared some trends that suggest 61% say Big Data Analytics is the one biggest priorities and that greater than 85% will offer booking via mobile and mobile boarding passes in the next 3 years."

If you didn't get a chance to meet with Bipin to get a walk through of our new airline commerce platform, be sure to join Guestlogix on December 13th @ 10 AM EST for a live demo of our upcoming product release. SVP of Product & Marketing, Robin Hopper, will give a walkthrough of the platform and answer questions in a Q&A at the end. Register here: http://bit.ly/2zLKnmA